Warehouse with Coca-Cola soft drinks of Refrescos Bandeirantes in Brazil

Coca-Cola Refrescos Bandeirantes has expanded the storage capacity of its centre in Trindade (Goiás, Brazil) with two high-density solutions from Mecalux: drive-in racks and racks run by the Pallet Shuttle system. Furthermore, a tunnel has been fitted out with live channels in the Pallet Shuttle rack blocks to speed up order picking. This mix of customised, efficient and agile solutions makes it possible to manage 14,200 SKUs and process 3,000 orders per day. 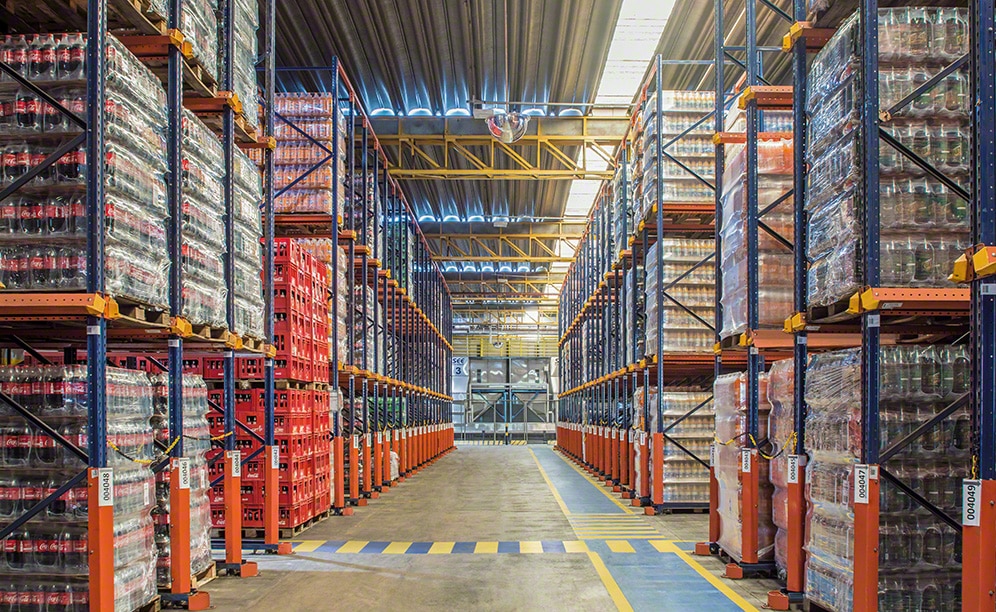 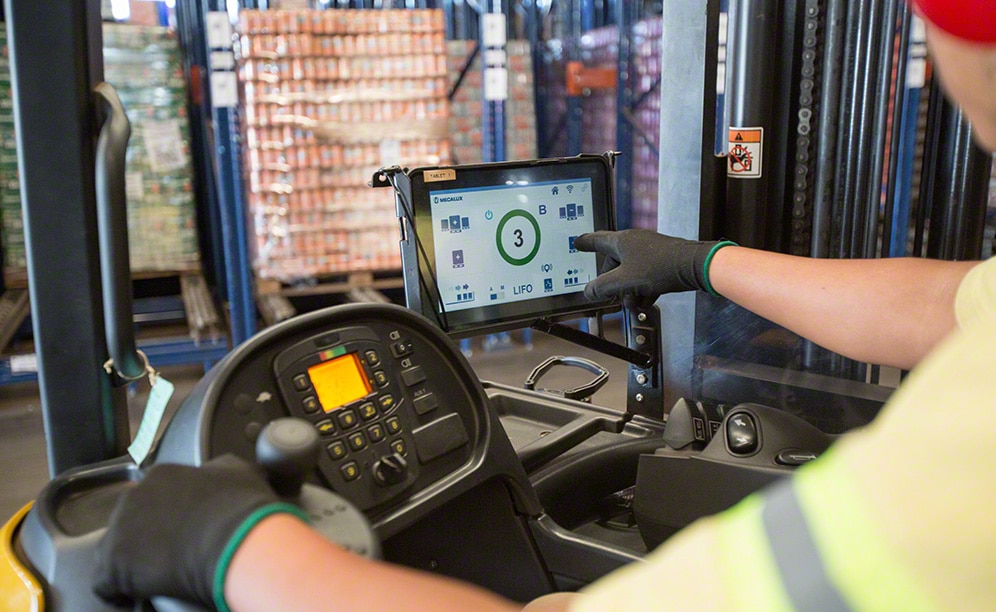 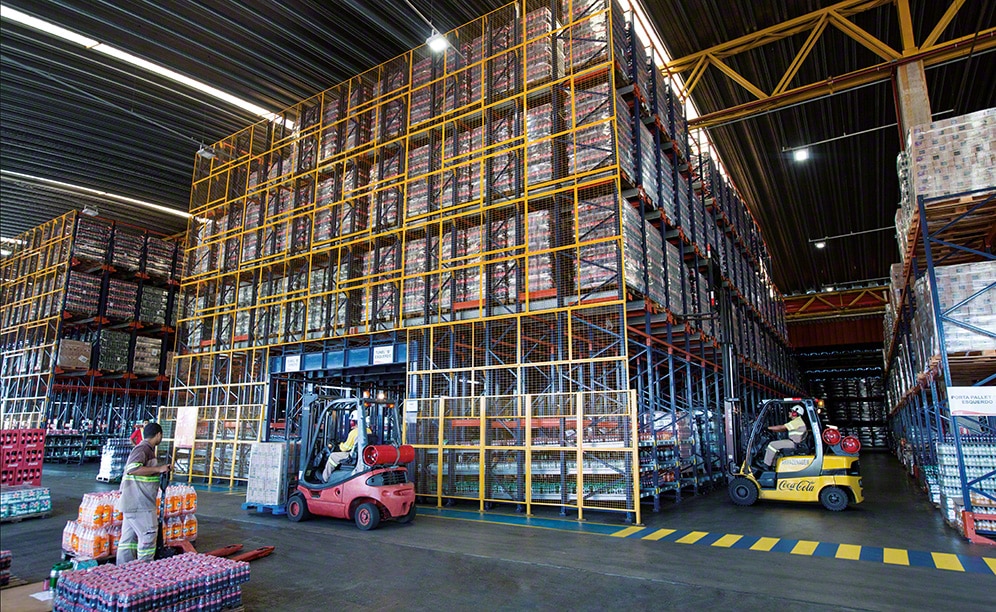 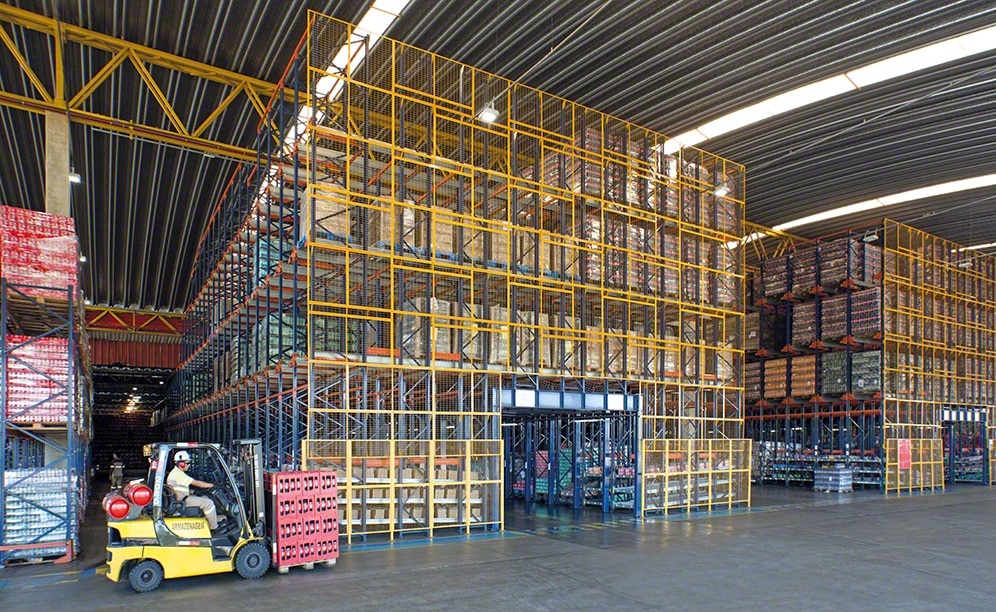 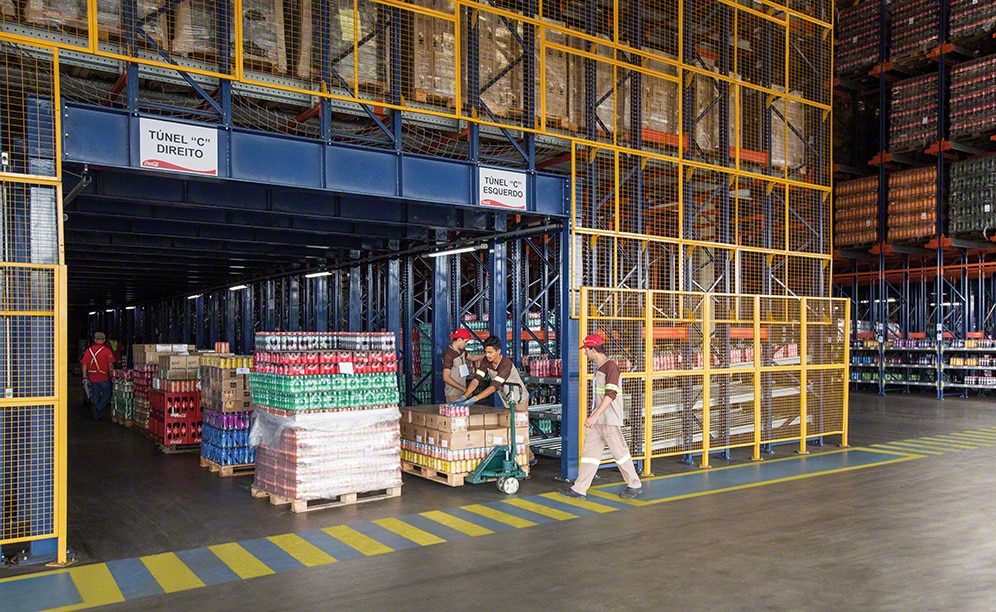 Coca-Cola Refrescos Bandeirantes is a Brazilian company which is part of the Grupo José Alves. Founded in 1987, it employs more than 2,900 direct employees and 5,500 indirect employees.

The company is the exclusive producer, distributor and marketer of ‘Coca-Cola Brasil’ soft drinks, Del Valle Frut and Del Valle Fresh juices. This also applies to beverages such as ‘Heineken Brasil’ beers, juices, teas, energy and chocolate drinks hydrotonic and soy-based beverages from León Alimentos, as well as mineral water from Crystal Acqua Lia. Conjointly, it also distributes the Monster energy drink in the Brazilian states of Goiás and Tocantins.

It has one factory and nine distribution centres in the cities of Palmas, Gurupi, Itumbiara, Uruaçu, Anápolis, Dianópolis, Rialma, Porangatu, Morrinhos and three cross-docking facilities in São Luís de Montes Belos, Rio Verde and Aparecida de Goiânia. Besides all this, the company operates a fleet of more than 600 transportation vehicles.

The Coca-Cola Refrescos Bandeirantes warehouse in Trinidade (Goiás, Brazil), covering 10,000 m2. It has two main functions: to receive bottled soft drinks from the adjacent production plant, and to prepare and forward orders to distribution centres and the thousands of customers the company has in the Goiás and Tocantins States.

A well-organised warehouse is needed to supply 228 cities and more than 32,000 points of sale directly, offering both storage capacity and agility in terms of handling flows and order preparation.

Alisson Ferreira, Manager of Planning and Logistics Operations for Coca-Cola Refrescos Bandeirantes, explains that “we needed to expand our centre’s storage capacity substantially, and to modernise the pick-related operations. The aim is to cope efficiently with an ever-increasing production rate.”

The warehouse currently receives 1,900 pallets containing finished products every day. Of these, the production site ships 1,500 pallet with soft drinks packaged in plastic, tin or glass, while the balance of the 400 pallets originate from outside the facility and contain beer, tea and juices (Heineken and Leão).

Two compacting storage systems have been installed to slot and manage all these products. Eleven blocks of drive-in racks are on one side and two blocks of racks with the Pallet Shuttle system on the other. A tunnel has been fitted out on the lower level of both Pallet Shuttle run blocks of racks with live channels for picking. Finally, two blocks of double-deep pallet racks help to fill out the whole operation. The combination of these different logistics solutions makes it possible to store 9,076 pallets and prepare and ship out 3,000 orders per day on approximately 1,900 pallets.

Alisson Ferreira - Manager of Planning and Logistics Operations at Coca-Cola Refrescos Bandeirantes
“We are more than happy with the very personalised solution installed by Mecalux. We have opted for space-saving storage systems because they are designed to increase capacity and improve warehouse organisation. Moreover, the assembly was done without interrupting operations, something essential for our company.”

Products packed in glass containers are stored in an area where pallets are stacked on top of each other. Additionally, “the empty containers that are later used in the production plant are also managed in the stacking area,” indicates Ferreira.

This system, encompassing virtually the entire warehouse area, makes the most of the available space to provide greater storage capacity. Each of the three levels is equipped with support rails and pallet centralisers, so loads are properly inserted.

Operators, driving counterbalanced forklifts, enter the inner lanes with the load raised above the level where it is going to be deposited. There are floor-level guide rails that assist the forklifts in entering and moving inside lanes safely and centred.

Pallet Shuttle racking with one pick tunnel
Alisson Ferreira is convinced that “the Pallet Shuttle system, of all the high-density storage systems, gives us greater productivity because a motor-driven shuttle moves the pallets inside the channels automatically.” For this reason, this system has been designed for the highest rotation products.

The Coca-Cola Refrescos Bandeirantes warehouse has installed two blocks of space-saving Pallet Shuttle system racks right next to the dispatch area. One of the blocks is 6.5 m high and the other 11 m high, offering a storage capacity from 1,508 pallets.

Both these blocks were set up with 36 m long pick tunnels enabled along the bottom of the block of racks. Here, operators collect the SKUs that comprise each order directly off the pallets located in the live channels. These can accommodate up to four pallets deep. One of the blocks has three levels of live shelves for hand picking of boxed items. Each level can support up to 540 kg.

The goods are fed into the live picking channels via the loading aisle and, as they are inclined, are moved along by gravity to the opposite end of the picking tunnel. “Operators have adjusted to this operation very quickly. From day one, the team has noticed that, with this system, work is done faster and safer,” adds Alisson Ferreira.

The two double-depth blocks of pallet rack, lining both sides of the picking tunnels, store 408 pallets with the product reserves used during order picking. As a result, the paths that operators must take to supply the live channels have been greatly shortened. With this combination of solutions, Coca-Cola Refrescos Bandeirantes makes much better use of the space available in its warehouse to achieve the warehouse’s top capacity.

Likewise, by arranging the products according to their level of demand and also equipping a special picking area, the overall speed and efficiency of order preparation has been improved.