The storage volume of the Desert Depot installation in Arizona has been doubled by optimising space at heights using push-back pallet racks by Interlake Mecalux. The American business, a subsidiary of the Gowan agrochemical company, is a key provider of third party logistics services. There are roughly 2 million hectares of U.S. land and 2 million employees devoted to some facet of farming. 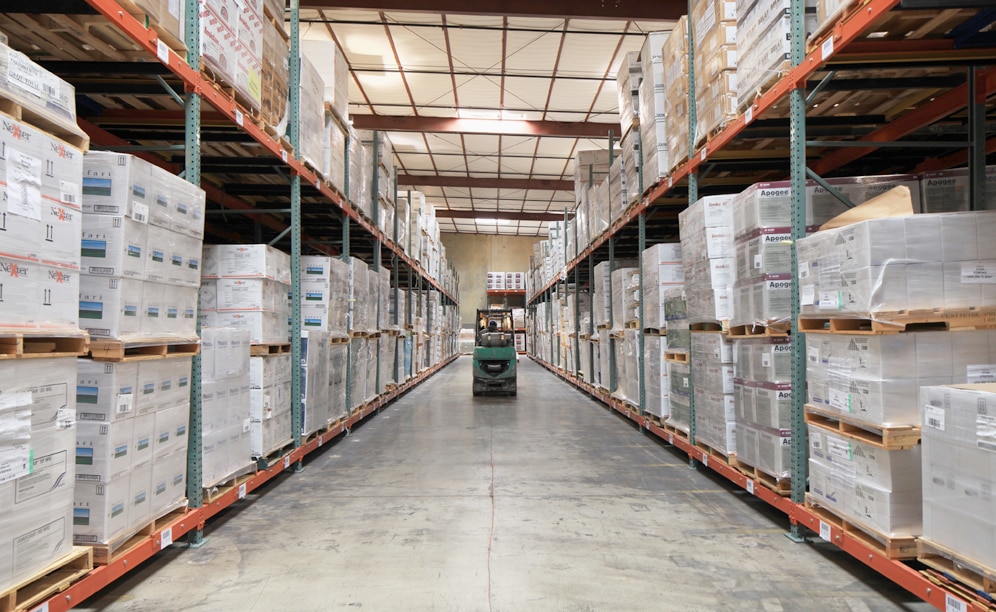 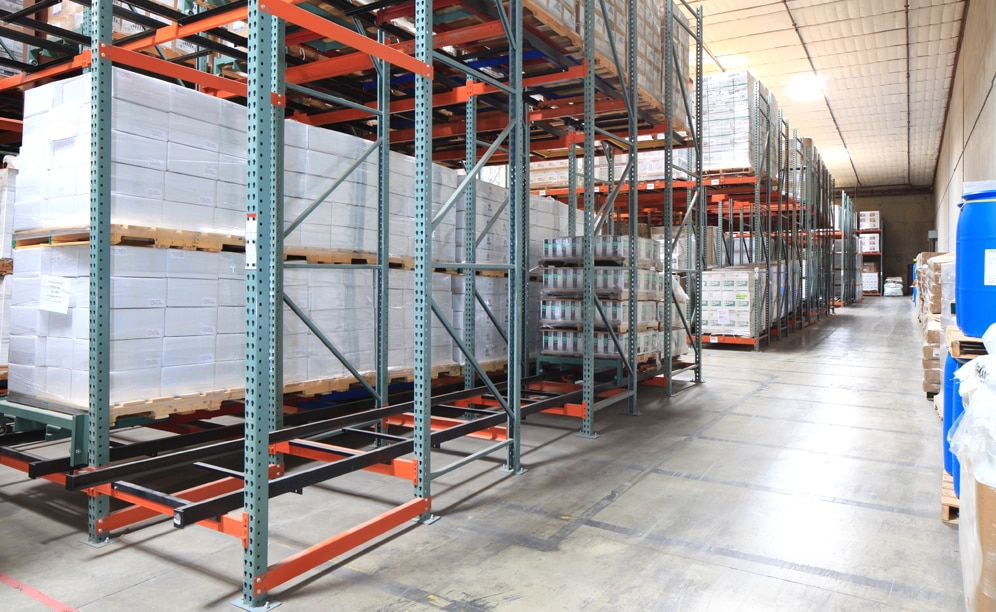 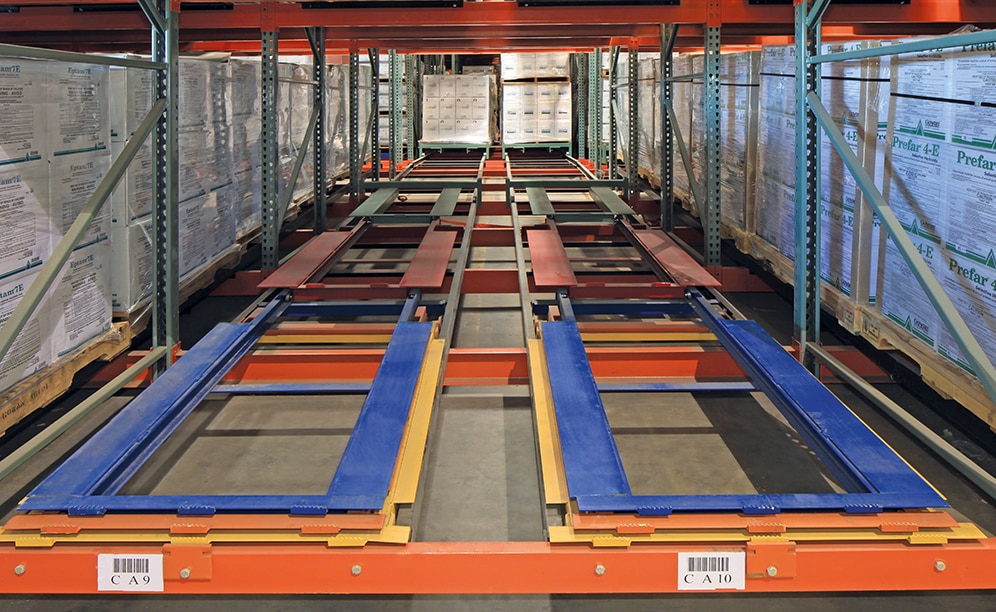 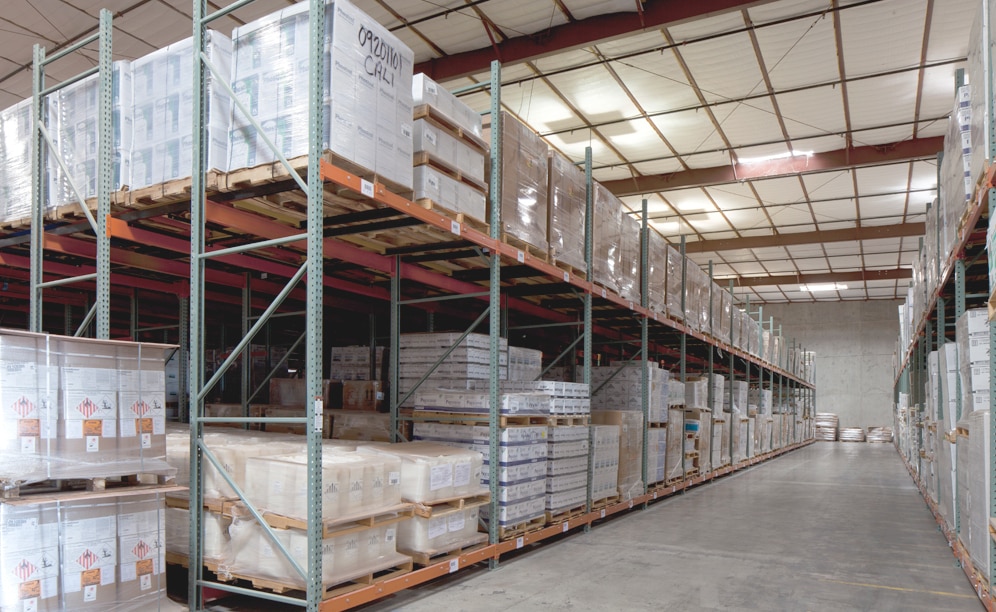 It is a logistics operator based in the Free Trade Area of Arizona (FTZ) since 1996.Residence within a FTZ allows customers to store imported consumer goods and raw material, and gradually use them to produce the finished product. Desert Depot is the one in charge of all this, so the functions of its warehouses revolve around the needs of its customers.

Consequently, the company stores an array of products for its packaging and mixing processes. Their storage needs were not common when thinking about the typical warehouse, given the drastic range in both the product container’s size and shape.

Needs of the customer

Despite serving some of the largest players in the U.S. industry, Desert Depot’s management still felt business costs could be trimmed and better use made of its own resources. They had a combined 65,684 m2 of facility area, but a third of their space, a nearby 17,373 m2 warehouse they were leasing, was costly and inefficient. So, the company made it their objective to plan their way out of it and optimise their own space.

When the current layout was analysed they saw they could change, among other things, the facility’s floor plan in order to increase overall storage density. They knew this would immediately cut costs, rather than spending rent money on another warehouse. So, they started looking upwards to the roof and realised there was a lot of upper cubic metres being wasted in the warehouse. The system needed to allow for both very narrow and very wide pallets to be stored. The variety of pallet sizes made flexibility a crucial factor for Desert Depot. And that would determine the width of the storage aisles, which could not be too tight.

The solution
After a year of analysing feasible solutions, Desert Depot awarded the overhaul of its 31,455 m2 space to its longtime material handling provider Naumann Hobbs –the Southwest’s largest in the sector. Its aim was, above all, to maximise space and avoid having to resort to an external warehouse.

Thus, Naumann Hobbs was convinced that the push-back system by Interlake Mecalux was the ideal solution. The key to warehouse renovation was to avoid changing the company’s current product flow or material handling equipment.

Push-back pallet racking offered high-density, multiple product storage solutions that optimised all of the available space. The design allows all the stored products to be accessed from a single aisle, in a LIFO (last in, first out) method. Also, Interlake Mecalux offers beams and frames capable of supporting two-, three-, four- and five-deep push-back racking. Because Desert Depot did not want to change their forklifts and the trolleys used in push-back racking utilise gravity to move rear-placed pallets to the front, drive-in racks or telescoping forklifts were unnecessary.

Naumann Hobbs, the Interlake Mecalux partner, set up a nearly 5 m high push-back racking system with varying levels depending on the type and size of the stored goods. The depth of the racks also varies block by block: there is one that is three and four pallets deep, and another five pallets deep that was then adjusted hold a sixth pallet. In addition, the height of the Desert Depot warehouse allows one to stack a second series of pallets in the last racking level. During assembly, which lasted only nine weeks, it was business as usual at Desert Depot. As they were replacing the old racks with new ones, and the push-back mechanisms were being attached, small sections were off-limits, but never an entire area. So racks could go on being replenished with product, and daily activity continued.

A renovated facility
The development of the 31,394 m2 installation in Yuma (Arizona) with Interlake Mecalux push-back racking is a good example of how Desert Depot has evolved and improved over six decades.

However, they opted to not fully rack the entire warehouse, leaving an area open for incoming product. Part of that merchandise arrives in drums, so stackability in this area is an option without having crushing or safety concerns.

Added to all this is the easy working conditions with the push-back system and the rapid ROI of the new facility.