Mecalux has installed the high-density Pallet Shuttle system and live racking in the water bottling plant of Manantiales del Portell, a company who focuses on collecting and bottling water under the brand Aguade Chóvar. The two warehouseing solutions represent a storage capacity that exceeds 4,600 pallets. 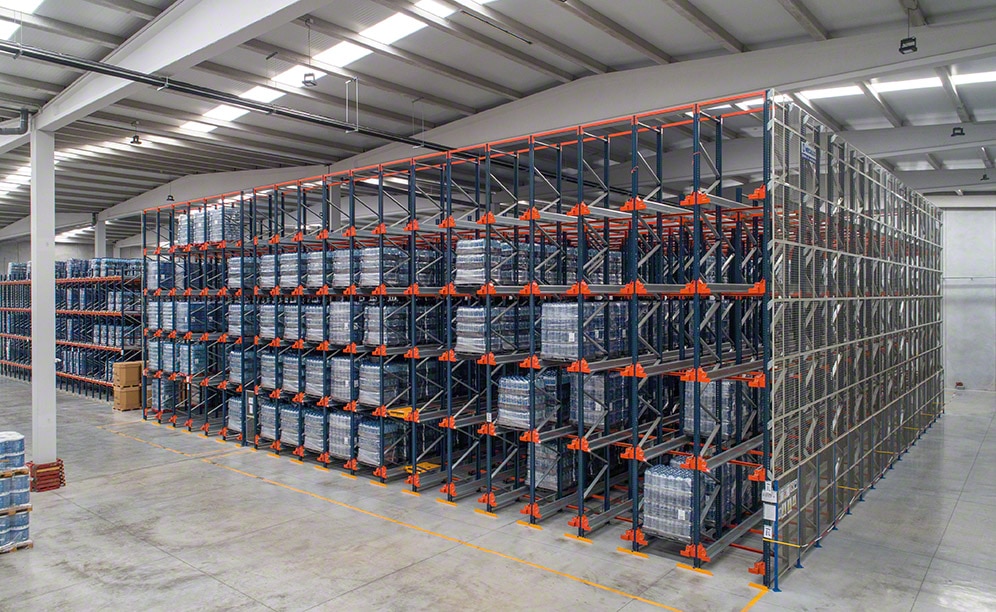 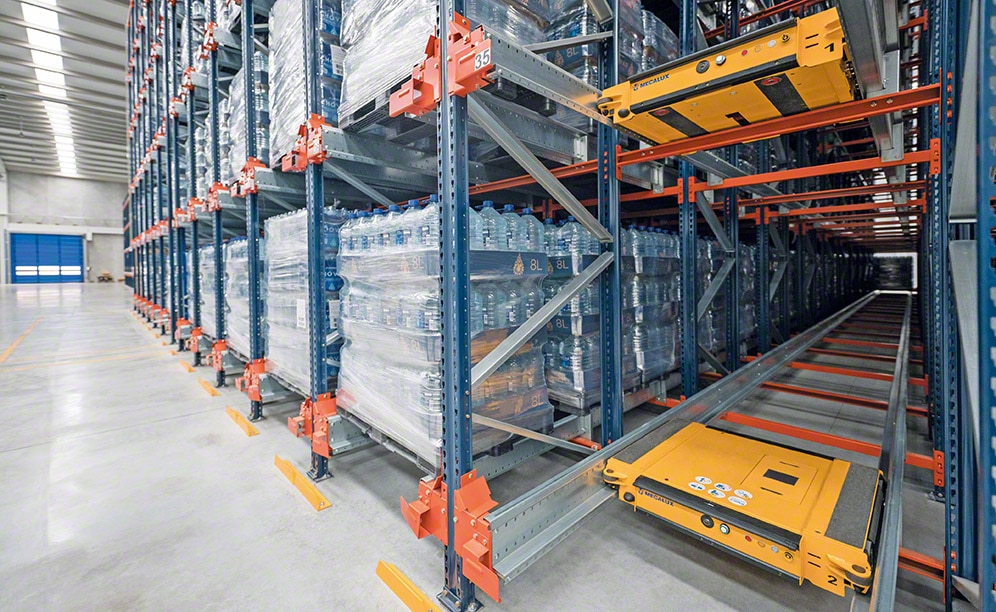 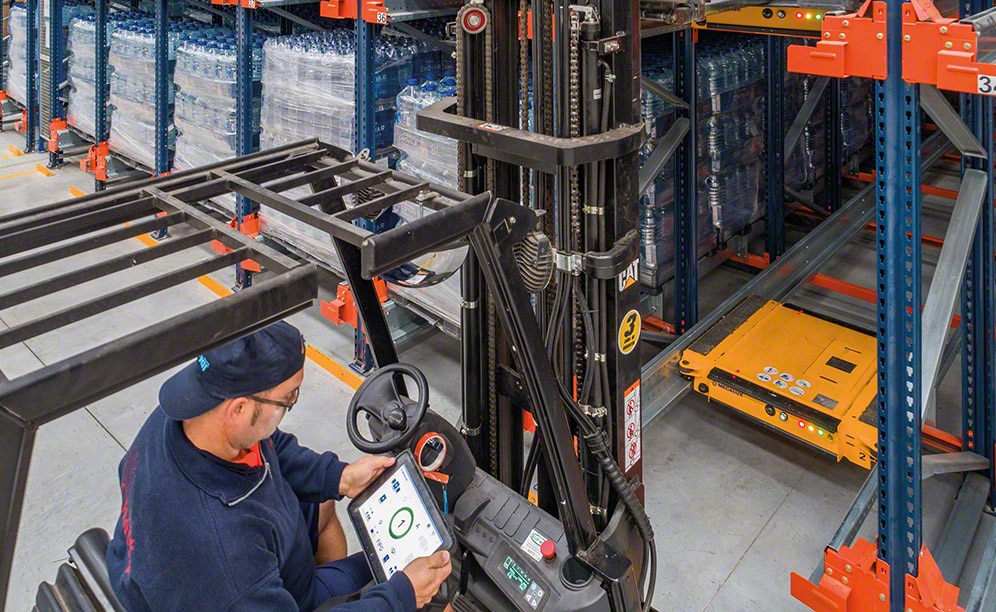 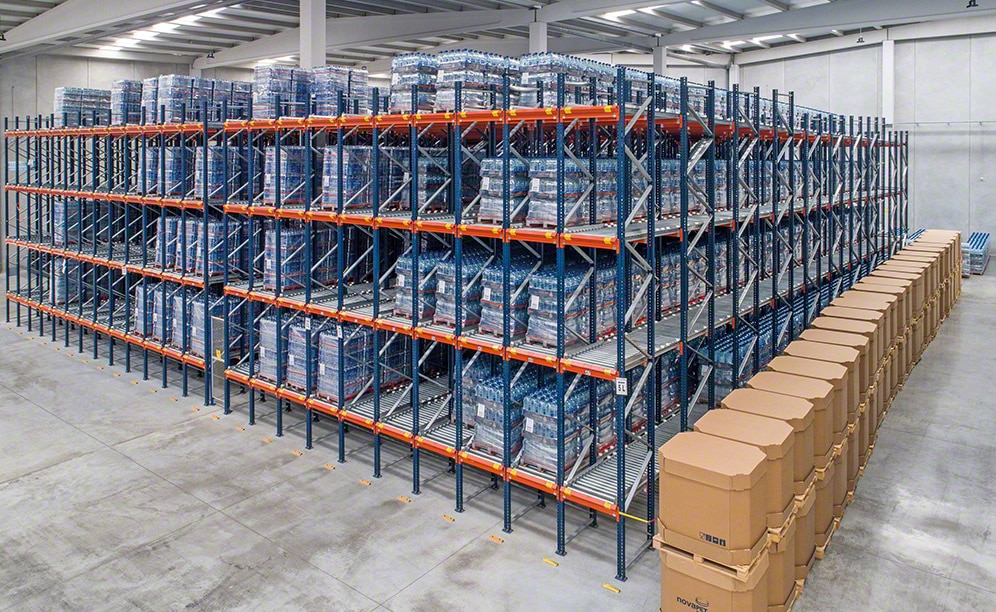 Manantiales del Portell is a Spanish company that specialised in the intake and bottling of water streaming from water sources in the Sierra Espadan Natural Park. In its bottling plant in Chóvar (Castellón, Spain), it procures, filters and bottles Agua de Chóvar water, an exceptionally pure beverage with a perfect balance of natural minerals and trace elements.

Looking to optimise the available area in this bottle water plant fully, Mecalux has installed two compact blocks of racks: one with the Pallet Shuttle system and the other with live racks.

The high-density systems fit the goods Manantiales del Portell sells like a glove, since it deals with homogeneous products –guaranteeing pristine rotation and making sure many pallets are available per SKU. By working with a perishable item, as is the case with bottled water, it is essential that the installed solution could respond to the demands of the FIFO workflows (first in, first out). In other words, the first pallet to enter must be the first to leave.

The compact block of racks is operated by two Pallet Shuttles, occupying about 780 m2 of space and containing a storage capacity for 2,850 pallets of 800 x 1,200 mm with a maximum 1,000 kg unitary weight. Standing 10 m tall, the racks have five shelf levels and 95 storage channels overall. Each one of these is able to deep store 30 pallets.

The Pallet Shuttle system, besides maximising available space through the high-density racking, also increases workflows by cutting the time used to slot or extract pallets from the channels. The motorised shuttle is tasked with carrying out in-channel movements, requiring minimal worker involvement.

When it has finished loading in a channel, the Pallet Shuttle is moved to where it will keep operating. The extraction of merchandise is done through the step described above, but in reverse order.

Pallets are slotted into the uppermost point of the racks, moving autonomously to the other end, where they wait to be extracted. The slant of the channels facilitates the proper gravity displacements of the pallets. The speed in which they slide over the wheel tracks is controlled via a brake mechanism. The ramp at the lane end halts the pallets progressively.

Workers’ movements are limited, since they only set or retrieve pallets from the assigned locations, while operating a front-loading forklift. Plus, distances to cover are minimal since all SKUs are located in the same aisle.

Warehouse of 4,600 pallets with the bottled water of Manantiales del Portell