Imagine a worldwide system for goods transport that worked like the internet: Goods are conveyed in standardised “packets” or containers. The network neither knows nor cares about the contents of each container. The network decides autonomously on the best route — carriers, vehicles, nodes and modes — and can modify the routing in response to changing circumstances. Switching between carriers, vehicles and modes would incur only trivial penalties in cost and time. Neither sender nor recipient needs to know or understand the detail of how the container is conveyed. The whole network operates under internationally recognised protocols and is open to any user. The transformation in transport efficiency would be a major contribution to the challenge of global logistics sustainability.

That concept is known as the Physical Internet (PI, or, inevitably, π). First promulgated by Benoit Montreuil of Montreal’s CIRRELT (Interuniversity Research Centre on Enterprise Networks, Logistics and Transportation) and others a decade ago, π may sound like a purely theoretical model. However, all the required technological elements already exist, and many have been piloted. Any barriers are economic, social and political, not technical.

All the required technological elements to create the Physical Internet already exist, and many have been piloted

Why should a Physical Internet be created?

Despite centuries of incremental improvement, the many inefficiencies of existing transport and logistics systems continue to create serious negative economic, environmental and social impacts. Economically, transport costs continue to increase, outweighing savings made in other parts of the supply chain. Social impacts range from externalities including accidents, pollution and noise to the wasted time, unsocial hours and working conditions experienced by drivers and others.

Environmentally, transport is one of the largest contributors to greenhouse gas emissions — 28% across the EU — and although EU emissions overall are decreasing, transport emissions increased by 0.9% in 2018 and a further 0.8% in 2019. Creating a Physical Internet would contribute to tackling the following challenges:

Current demand for freight transport is expected to triple in volume by 2050, which is clearly unsustainable socially and economically, let alone environmentally. It is vital that we find innovative approaches and concepts in logistics and freight transport that will decouple economic growth from a rise in freight traffic. The Physical Internet, π, is one such approach.

The Physical Internet holds promise to decouple economic growth from a rise in freight traffic, which is expected to triple in volume by 2050

An internet for stuff

A formal definition of the Physical Internet is “an open, global and multimodal logistics system founded on universal physical, digital and operational interconnectivity and enabled through standard encapsulation, protocols and interfaces.”

We can unpack this by exploring the analogies between the Physical Internet and the familiar Digital Internet. The Digital Internet connects billions of devices all over the world, allowing every device to communicate with all others. Users can be private, commercial or governmental: anyone with access to a computer or smartphone. The Physical Internet can similarly connect and be used by any consignor and consignee. (In both networks, it may be necessary to devise ways of barring bad actors).

In the Digital Internet, information is broken down into data packets and transmitted via a network of communication links. The data within a packet is encapsulated and is not viewed or processed by the internet; similarly, in the Physical Internet, a flow of goods is sealed in a series of standard containers, and π is not concerned with the contents. (Other agencies such as Customs may be, but that is not the concern of the network itself).

The digital packet header contains all information required for identification of the packet and its proper routing to the destination. The data packets are directed via routers, carried over media such as optical cables and switched between different media via modems. In the Physical Internet, each π-container is tagged using RFID and GPS so that it can be identified, routed and tracked as it passes through the network.

Digital Internet services are operated by various internet service providers. Protocols standardise and organise operations. Users enjoy a seamless connection service: they can use the internet without the need to understand how their data will be routed from its origin to its destination. Likewise, in the Physical Internet, the flows consist of goods packed into standardised packages known as π-containers (equivalent to data packets) and then transported by logistics service providers through a network of physical corridors. Just as the digital net can use and move between modes such as copper cable, fibre and microwave, so π can use road, rail, inland waterway, air and so on.

In the Physical Internet: Figure 1 - Schematic illustration of the Physical Internet (Dong and Franklin, 2018)

Standards in global logistics already exist — for containers, pallets and EDI (electronic data interchange) messaging, for instance — but adoption is far from universal. The Physical Internet generalises and significantly extends the notion of standardisation but also, importantly, connectivity.

Universal connectivity is one of the most important features of the Physical Internet and is needed in three ways:

Physical interconnection for a seamless flow of goods

The Physical Internet will not deal with bulk freight, pallets or non-containerised goods. It will only deal with π-container packages of goods. π-containers will come in standard sizes or modules, be environmentally sustainable (built from eco-friendly materials), smart (trackable/routable by RFID and GPS and able to interact with the network), secure, interlocking to create larger units, and, in most cases, capable of being collapsed for more efficient empty storage and return (see Figure 2). The Physical Internet will not deal with bulk freight, pallets or non-containerised goods. It will only deal with π-container packages of goods

In the Physical Internet, π-containers will be moved by π-movers. The main types of π-movers are: As in a conventional logistics network, there are nodes where consignments can be transferred between transporters or modes. In traditional systems, these nodes often perform other tasks (break-bulk, repackaging, labelling, etc.) to the detriment of transport efficiency. In the Physical Internet, π-nodes will be purely material handling, storage and transfer systems, thus:

π-nodes may have different capabilities, from the simple transfer of π-carriers between π-vehicles (cross-docking) to complex multimodal multiplexing of π-containers. π-nodes would be publicly rated based on key performance indicators such as speed, service, constraints on dimensions of π-containers handled, and capacity. This information will be used by the clients (human or virtual) for routing purposes and other decisions.

Currently there are two distinct ways in which freight is transported. Direct or point-to-point service is preferred when volumes justify dispatching a full lorry or train. But if the volumes are too low, shippers attempt to consolidate less than full lorry loads through a series of intermediate nodes (hubs). This is known as hub-and-spoke.

Both systems are inefficient. Direct service can mean that dispatch is delayed until the demand for a full load is present (or that the vehicle runs partially loaded anyway) and often results in empty returns. In hub-and-spoke, it is easier to assemble cargos with a high load factor and secure a backhaul, but a lot of time is then lost and extra costs incurred for intermediate handling and transshipment.

π holds promise to change this inefficiency. The Physical Internet is a distributed multi-segment intermodal transport network (see Figure 4). Each π-transporter will carry a load up to the next transit hub and then pick up a backhaul and return home within its work shift time. At the π-hub, another transporter (the same or another carrier or mode of transport) would pick up the load within a short time interval and move it on to the next transit hub, determined by what route is best for that container and destination at that moment. This way, the average transport time would be significantly shortened, and costs reduced. 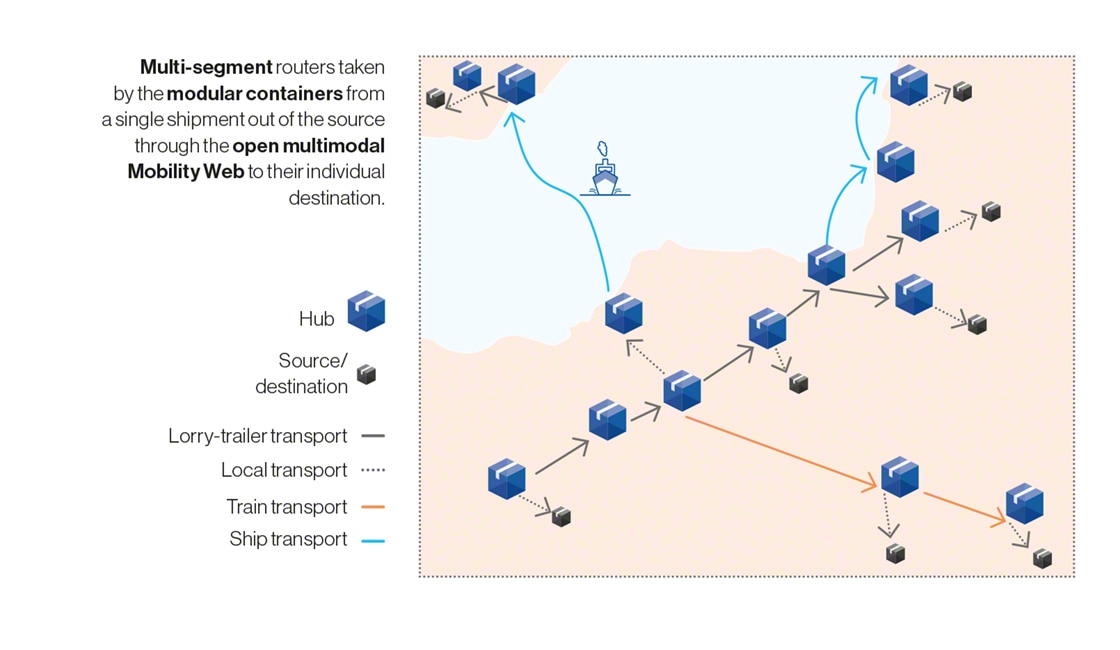 In the Physical Internet, decisions around routing and other factors can be arrived at in a number of ways. The main aim, however, is to achieve autonomous routing and operation in accordance with agreed procedures and protocols.

In existing logistics systems, most warehouses and distribution centres are used by just one or a few actors in a private network. The Physical Internet enables a transition from private supply chains to a global, open supply web:

It might be expected that warehouse management systems (WMSs) in the Physical Internet would likewise be open and connected. However, for commercial and privacy issues, access to WMS elements may be restricted to one company or a group of related clients. (The digital analogy might be with VPNs, Virtual Private Networks). However, since the Physical Internet is only concerned with containers, not their contents, this is not really an issue. An open, global supply web will lead to significant positive effects in terms of reduced lead times, increased utilisation, more efficient use of fixed and mobile assets, and reductions in economic, social and environmental harm.

According to a roadmap proposed by ALICE, full realisation of the Physical Internet is achievable by 2040

If the above is a convincing proposition, and the various required technologies are already available, what is impeding implementation of the Physical Internet?

Under the European Green Deal program, the ambition of the European Union is to be the first climate-neutral continent by 2050. The Physical Internet, as probably the most ambitious concept towards efficiency and sustainability in transport, supports the transition towards zero emissions. According to a roadmap proposed by ALICE (Alliance for Logistics Innovation through Collaboration in Europe), full realisation of the Physical Internet is achievable by 2040.

However, despite the fact that the Physical Internet offers significant improvements in the agility, robustness, resilience and environmental footprint of supply chains, there is little progress in its implementation. Some of the most important obstacles are:

One way to promote the development and adoption of the Physical Internet would be a phased approach with incremental growth in terms of complexity and coverage. This could be achieved though planned, targeted and continuous research and innovation action based on intensive collaboration between industry and academia.

Dr Milos Milenkovic worked as a Research Fellow at ZLC. Currently, he is an Assistant Professor in the Faculty of Transport and Traffic Engineering at the University of Belgrade, Serbia. Dr. Milenkovic holds a PhD degree in Technical Sciences in the field of Traffic and Transport with a focus on rail freight car scheduling and fleet sizing problems, a Magisterial degree of Technical Sciences with a focus on train dispatching problems and an MSc degree based on railway related intelligent transport systems from the Faculty of Transport and Traffic Engineering (University of Belgrade).